How To Throw A Cheap Fun Halloween Party For Children!

So it's October now and the spookiest time of year is fast approaching.... Halloween!
You're thinking of throwing a party for your little monsters? and why not ?!
Have a look at what we got up to Halloween 2012!

I wanted to throw the kiddies and a couple of their friends a little party but of course Halloween fell on a skint week so I improvised!

Decorations you can grab cheap enough in most pound stores but if that isn't feasible then make them.
My table cover I made using some black sacks and the kiddies red paint.
For the food I made sandwiches and cut them into coffin shapes and used a little food colouring to paint words/crosses onto them, the boiled eggs again I used food colouring to make them into evil eyes.
I made red jelly with sweets inside, I decorated chocolate wrappers with the word boo. I done vampires fangs with blood dip aka chicken dippers with ketchup, as well as a few other nibbles I had in so I didn't actually buy anything apart from the jelly which cost a couple of pound for a few packs.

So every children's party needs games right?!, again I improvised as it were I had a few toy plastic spiders so I used them as mini prizes along with sweeties, We played games such as guess what's in the box... this was fun and got lots of frights! I made some simple salt dough and rolled it out and bunched it up on a plate like intestines, I added some washable red paint and placed it in a box and covered the box leaving just a slit for the children to put their hand through and feel.

The kiddies and I made a piñata the week before using just a balloon tissue paper and paste made from plain flour and water, we decorated it using paint. I had all the children come outside and we had a competition who could find the best stick to hit the piñata with, Next the children beat it and all the sweets fell out!

Another fun game was to fill a bowl with jelly but have sweets inside like jelly worms, eyeballs, jelly brains ect, place a lolly stick upwards in it and get the children to try remove the lolly using just their mouths, And of course apple bobbing!

And of course no party is complete without some music to throw some shapes to.

HERE is the particular playlist we used!

So what will you and your little monsters be doing this Halloween and what are they dressing up as?
Whatever you do have a Spooktacular time! 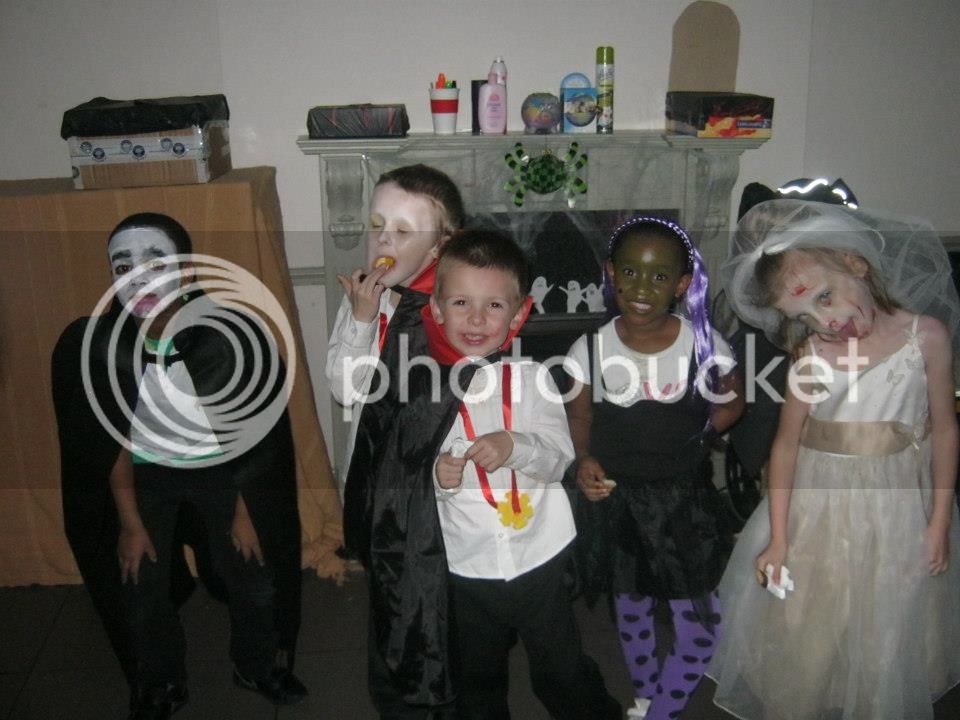